People in Krugersdorp and the surrounds are crazy about fitness, says Juan. “We felt that residents were tired of conventional training so I opened a BODYTEC studio in 2015,” he says. He hasn’t looked back and he’s certainly in the right job as Juan’s sport of choice is all about getting his muscles into peak form.

Juan first earned his competitive sports stripes with karate, and was part of the Gauteng karate team that participated in the All Style Karate Championships where he was awarded third place. “The reason I started bodybuilding is because I was inspired by my all-time hero Arnold Schwarzenegger. He won the Mr Universe title at age 20 and went on to win the Mr Olympia contest seven times. I had the great experience of meeting him at the Arnold Classics in Sandton and was one of the guards who assisted him through the crowds,” says Juan.

While the results of his hard training are a constant motivator, Juan says he simply enjoys working out, and training with the goal of building muscle is something he takes seriously. “If you have this goal, you should approach it like any other. You should concern yourself with the process. Identify a strategy and put it into effect. And with every step you take to achieve that result, you should have good reason. Keep on pushing, don’t stop or think, “Well I’m not seeing any results”. Change your programme reassess, refocus, re-engage and you’ll see that it’s all in the mind and that’s what’s keeping you back,” he explains.

He’s learnt the hard way. Reflecting back on his first competitive season in 2015, Juan recalls how tough it was. “My first competition prep lasted 16 weeks and it was the hardest thing I’ve ever done. It not only challenged me physically, but mentally and emotionally. It took willpower to overcome each temptation and obstacle – hanging out with my friends in social environments, drinking, fast food, being too tired to work out, being hungry and not being able to eat what I wanted. But every time a temptation was overcome, it was soon followed by joy. Waking up the next day knowing I conquered another temptation… I loved it!”

It was the same year Juan opened his BODYTEC studio. “Much like high-intensity weight training, EMS training increases muscular density or ‘hardness’. So the thing to think about with EMS is density, not size. Think of it as maximal strength training and not hypertrophy training,” says Juan. “Also keep in mind that EMS is for large muscle groups and smaller groups. It contracts muscles maximally at between 80 and 90%. With conventional voluntary contractions you’d be able to push between 30 and 50%. With ‘involuntary’ we can increase it significantly. It’s more of quality contraction.”

Bodybuilders could also use EMS to help them break through a barrier, says Juan. “For example, if a guy’s upper body is weak compared to his legs, he could use EMS to maintain his legs for a few weeks while focussing on upper body training. Basically, he’d be allowing his body’s recovery mechanisms and central nervous system to focus on his upper body. He wouldn’t lose any size in his legs and may even see some improvement in density during this time of upper body specialisation.”

If you’re keen to follow in Juan’s bulky footsteps, he suggests you start by mastering basic form and technique. “Use full range of motion. When you get more advanced you can begin to bend those rules to increase intensity. Try to improve every workout, whether it’s an extra set, more reps, more weight, or better technique. Over time you’ll accumulate massive improvements,” he says.

Juan is the studio owner of BODYTEC Ruimsig 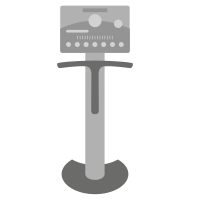